6 Nights Tubbataha National Park Expedition
This 6 night liveaboard adventure allows up to 19 dives, including 4 sunset dives and takes you to Tubbataha National Marine Park as well as covering some of the highlights of the South Visayas such as Apo Island. 150km South East of Puerto Princessa, on Palawan Island, the Tubbataha reef system covers 970km², with 100km² of pristine coral reefs for divers to explore. Formed Millennia ago along the Cagayan ridge, Tubbataha consists chiefly of two atolls (North and South) and the Jessie Beazley reefs. This delicate reef system supports over 600 different fish species and over 300 coral species, whilst providing a haven for nesting hawksbill and green turtles and numerous birds. A field station on the north atoll is manned by rangers year-round and during your trip you can visit the rangers to learn more about conservation and reef protection. 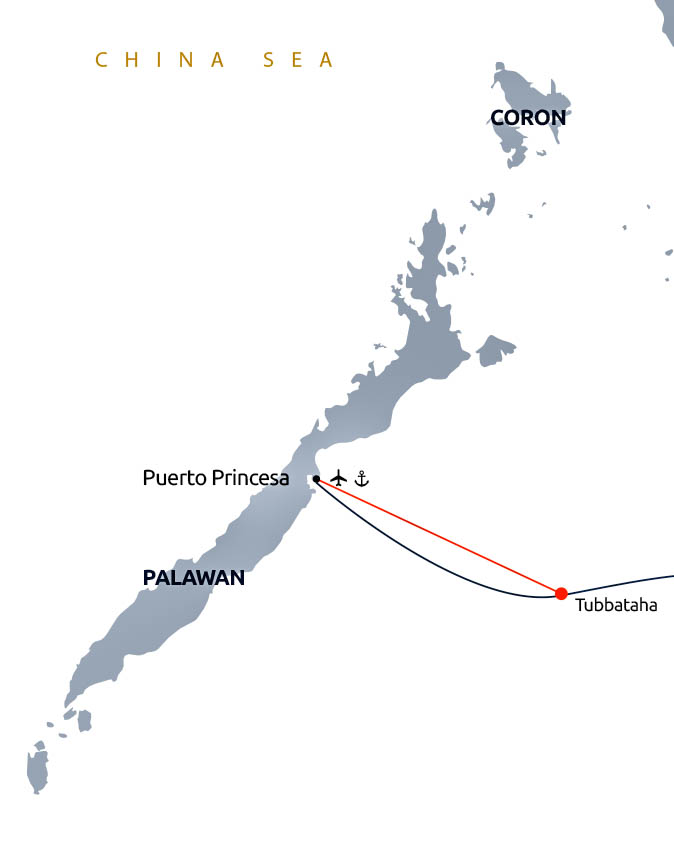 Note : Additional payments will be required throughout the duration of the booking by Master Liveaboards. Full details will be confirmed at the time of booking confirmation..
Valid for travel from April 26, 2023.
Valid for travel until May 2, 2023.
Only available for sale until January 19, 2023.

A chain on mountains, reaching 2086m at its highest point, stretches across the island, blanketed in a lush virgin rainforest which spills down the slopes to meet the 2000km of bright white sandy beaches and rocky coves that line the coastline.

The two most popular areas frequented by tourists are El Nido, located on the northern-most tip of the island, and Puerto Princesa, sitting on the central coast. Puerto Princesa is the capital of Palawan, famed for being the cleanest, most charming city in the Philippines, and the port used for all liveaboard cruises sailing the surrounding seas.

Palawan is a melting pot of culture, with over 87 different races and cultural groups calling this island home. The majority of the populace still consists of the native Palaweños, with the remainder made up of minority groups who have migrated from other areas of the Philippines. This mixing of cultures gives Palawan the vibrancy and welcoming atmosphere that it is so well-known for today.